The optional TS22 trigger switch operates when the trigger blade reaches its most backward position as you shoot.

TS22 is available from the store

TS22 operates in "normal" trigger mode where the gun fires when the trigger is pressed.

TS22 does not support "release" mode where the gun fires when the trigger is released. 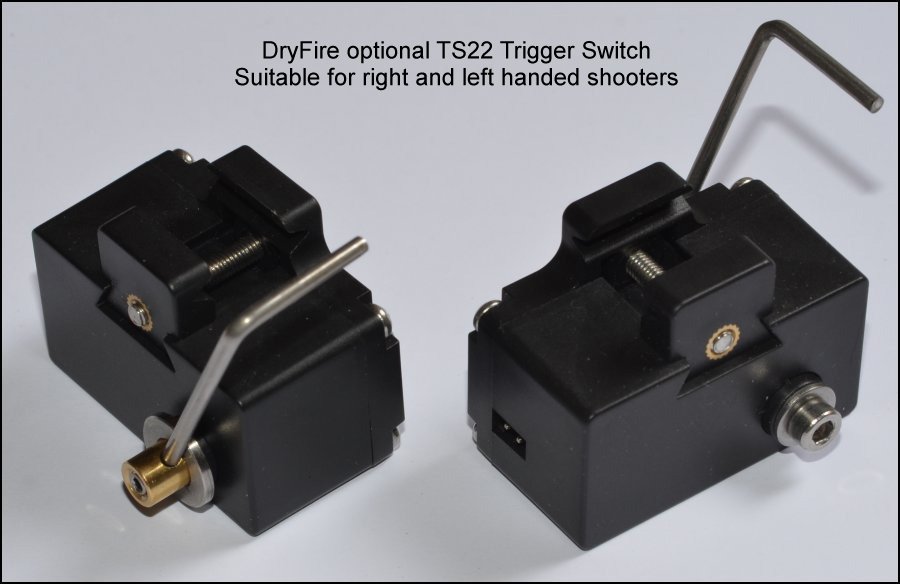 With unrestricted access to the front of the trigger blade, TS22 provides the "trigger feel" that many top shooters find important when shooting.

TS22 is an optional accessory and may be used instead of the wrap-round switch provided with DryFire.

The DryFire wrap round trigger switch has stood the test of time (over 20 years!), can be used with any sort of gun, and is the standard switch provided with every DryFire system.

The photo below shows the wrap-round trigger switch set up for a left handed shooter. The "tail" of the tie is on the opposite side to the trigger finger and excess cable is wrapped round the trigger guard. 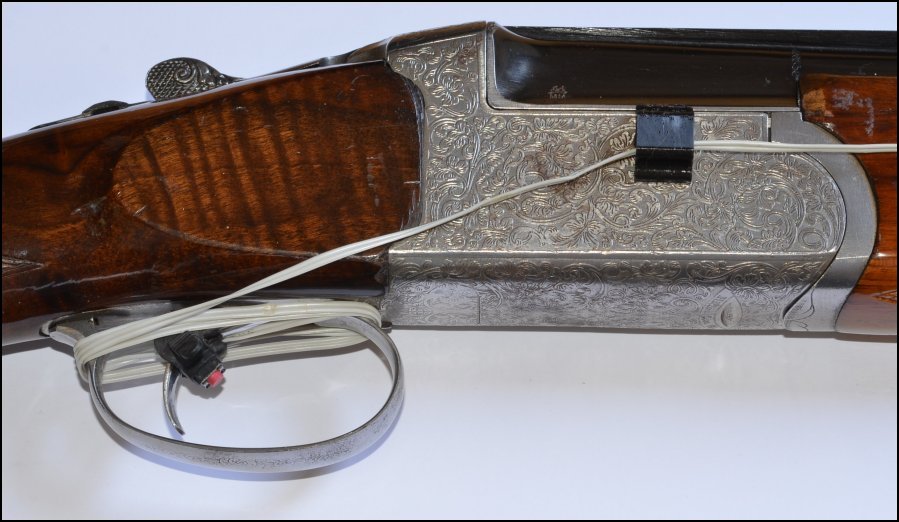 The photo below shows the TS22 trigger switch set up for a left handed shooter.

Note: the operating arm is on the opposite side to the trigger finger and a magnetic clip holds the cable to the gun's action. 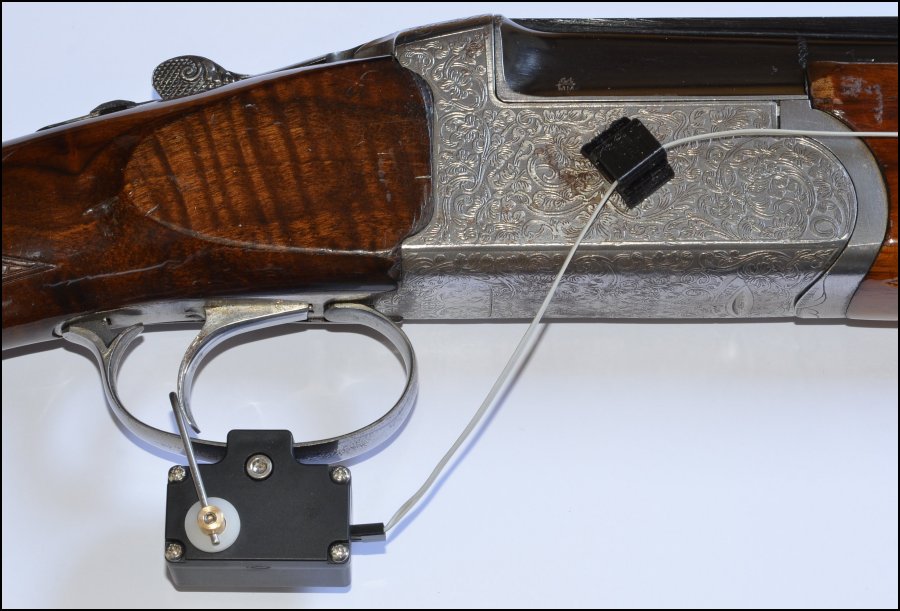 The photo below shows the TS22 trigger switch set up for a right handed shooter. 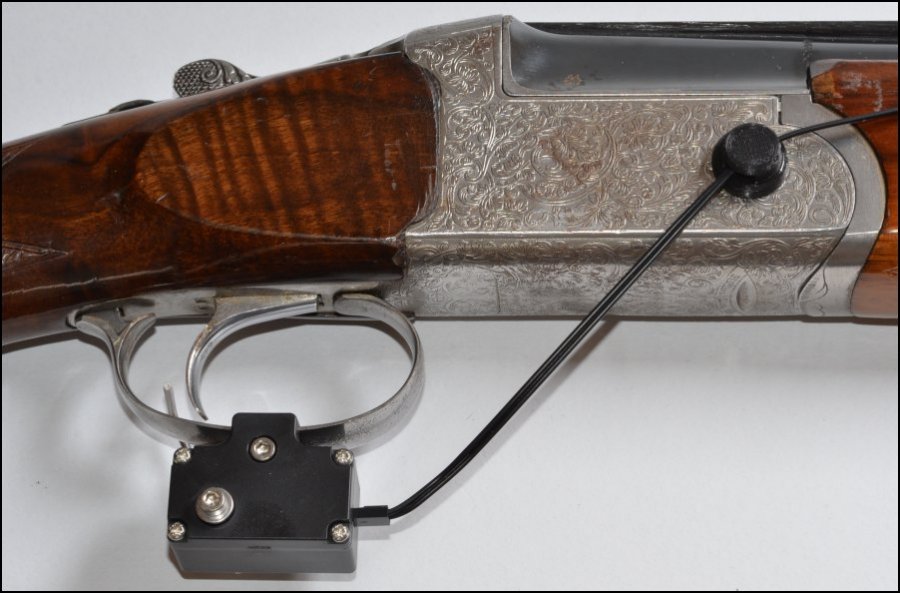 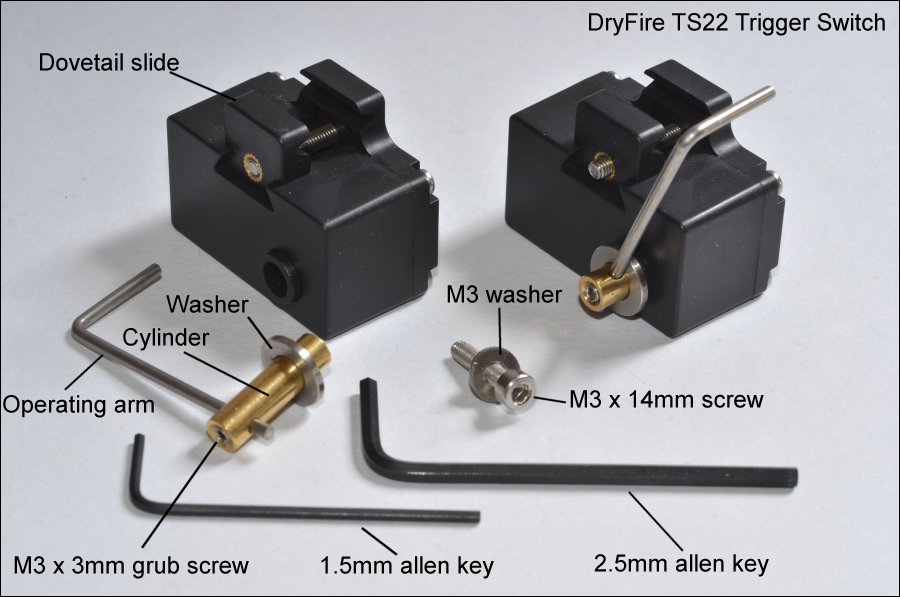 Please follow the fitting instructions carefully - they may seem a little "fiddly" the first time you use them but from then onwards fitting TS22 should take only a few seconds: fit to guard, slide to correct location, lock in place.

The instructions allow you to set up for right hand or left hand use.

Do not put the operating arm hard up against the trigger blade.

The operating arm rotates very slightly (about 1.5mm - see the video below) - trying to force it beyond this limit of movement will damage the switch. When installed correctly the switch should operate during the last 1.0mm/1.5mm of trigger movement.

You can feel, and perhaps hear, the internal switch operating as the operating arm is pressed.

These things are important to many shooters.

However, the weight of the trigger, the amount of pressure required to release it, is determined by the sears inside the trigger mechanism of each individual gun.

To be exactly the same as the real thing the trigger must be set ("cocked") and released in exactly the same way as when shooting a cartridge. We recommend the use of snap caps to protect your firing pins if you intend to set the action by opening and closing your gun between DyFire targets.

The new trigger switch can be adjusted so that it operates the UGA at exactly the point where the trigger mechanism is released.

All of this is fine but what happens for the second shot when shooting doubles?

For guns with mechanical triggers this is no problem because when the trigger is released for the first barrel the action automatically switches ready for the second.

For guns with inertia block triggers the release for the first barrel is fine but the action is not automatically switched to the second barrel because there is no recoil. You need to take this into account when adjusting the location of the operating arm so it functions correctly for both single and doubles targets.

You can, if you wish, open and close your gun after every target to reset the trigger - just as you do outdoors. However, life is much simpler if you keep the gun closed and adjust the operating arm so it functions at a specific point in the trigger pull.